From time to time a customer will get a knife in the mail and email or call me to ask questions. Like, “This blade has a little play, is that common”, or “I just snapped a thumbnail, it this bear trap normal”. So, it may be time to have a conversation from a dealer perspective on what generally can / can not be expected from the different brands. This document will probably be an ongoing work, but will have more detail than what I want to put in the FAQ’s. Also, this is my opinion and the facts are from my understanding; if someone challenges me I will abandon them completely ;> 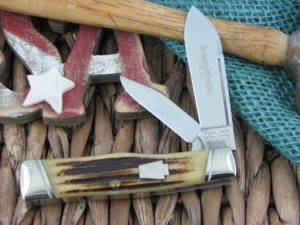 I was at a gun show one time asking a gentleman a bunch of questions.  Finally he said “I have already told you a lot more than I know”.  It always stuck with me that the world would be a better place if people only tried to tell someone else something that they actually knew about.  And, whereas there are surely many people that know more about cutlery companies, and Queen in particular, I will limit this to what I have held in my hands.

Although I have seen several of the old early 1980’s imitation winterbottom Queen Steel knives; I was never impressed enough to investigate further back.  There have been some NKCA knives, etc. that came thru here that seemed alright.  But nothing that really sparked my interest until the mid to late 1980’s.

The 1980’s were the contract days.  Queen Cutlery started making the black box Winchester’s, and what a great line of knives.  This was the first time in decades we had seen hard snap, tight, knives that really just begged to be used.  There was a multitude of patterns and some very rare and unique knives for sure.  Little coffin jacks, wharncliffe half whittlers, big knives, little knives, something for everyone.  This series continued until way up into the 1990’s.  Blue Grass Cutlery still won’t acknowledge where the USA Winchester line comes from, but it is no secret.  There must have been a really good relationship between Blue Grass and Queen, because Jim Parker also used the two of them to do the largest part of the Case Classics program.  People were slow to pick up on the Case Classics, but when they took off, they really took off.  I have a friend that was buying Case Classics from Parker for $30-45; and these knives are in the $200+ range today.

But, in my opinion, it was these two series of contract knives that put Queen back on the map.  I don’t even know how big they ever got before; but they were on their way now.  Thru the 1990’s they were making thousands of knives on contract.  Moore Maker even used them exclusively for his top of the line knives during this period (and Camillus for the economy series).  I have always said there eventually comes a time when a factory must decide between
quantity and quality.  But Queen really made great knives in the 1990’s in volumes that they had never seen before.

As the Winchester and Case Classics series started winding down, the Queen Cutlery brand started showing up in more volume than before.  The Schatt and Morgan series had been being made in the 1990’s; but you just didn’t see a ton of Queen knives.

With the coming of 2000, more and more people were figuring out who was making some of the best knives in the country.  The demand for Queen products started showing up in the marketplace and the products started making a name for their own namesake now.  The early 2000’s saw a great product from Queen and a lot of demand for them.  By the latter 2000’s (say 2007), Queen was in such demand that Wayland Moore had told me they were 6 months behind supplying him with just his contracted knives – much less all other brands they were making.  In hindsight, I wonder if this might now have been the point in time that they let the quantity being produced take a front seat to the quality being produced.  It just occurred to me, that this was also the timeframe the Bill Howard left and founded GEC.  And if he was as particular there as he is at now – he would have definitely held them to  a higher standard.

Don’t get me wrong, the Queen / Winchester / Case Classics never had water tight backsprings nor were they void of the occasional blade play.  But in the late 2000’s I really started to see a slip in quality.  Little curls of brass on the liners would be left on and cause a significant gap in the backspring.  The Mountain Main lockback blade play seemed to get worse.  And just little things here and there.  In 2010, they put out the worst yearly series I had seen to that time.  Poor satin finished edges that had bevels that just seemed to wander around.

Within a year it was obvious there was trouble.  There was some shakeup at the factory not long after and the quality really seemed to suffer.  The Heritage series would replace the yearly set, and these continued this ham-handed approach to fine cutlery.  The Heritage set was still a good knife, especially for an old style user.  But they were not the fit / finish that the collector market had gotten accustomed.  Surprisingly, the Queen ACSB and Curly Zebra lines kept their great quality thru this shakeup in the S&M turmoil.

Things seemed to get worse up until the time that the Daniels family bought the name and factory in early 2013.  I can’t help but think by this point the product had run off just about everyone that had come to love it in years past.  In order to get some cash flowing and start the company back on the right road, the new owners put out a lot of “parts knives” that were made from the parts on hand.  There were some very unique knives and generally seemed like they were going to pay closer attention to the fit finish of the brand.

Standard runs (ACSB, Curly Zebra) seemed to maintain the level of quality fairly well with only a few little hiccups that seemed more likely due to personnel doing the work at the moment than any process failure.  But the special runs over the last 15 months have had engineering complications that went along with a lackluster finishing.  Up until a few weeks ago I had started receiving orders that showed great promise.  Not only were the new owners listening to customer cries for a better honing, but the fit/finish and quality control really seemed back on track.  But the last couple of orders I have received have slipped back to the unacceptable level and I have had to send the majority of the order back for repair or replacement.

So, of all the brands I carry, Queen has made some of the best knives and some of the worst knives.  There has never been a better large congress made, in my opinion, than those similar to the one pictured above.  But, it has become a requirement that I check out each knife as it comes in the door.  As of late I have been surprised, both for good and bad.  I never really paid much attention to how nice the older (pre 2010) product was, until the quality started going south.  But I do still have a lot of faith in the people running Queen now.  Not only do they know knives, but they have shown a sincere interest in improving and maintaining the quality of the Queen and Schatt & Morgan products.  But, for now, I am keeping a very close eye on their new issues.

Issues that are common with Queen / Schatt & Morgan knives:

Again, I welcome your comments.

8/15/15 Update:  CollectorKnives is no longer purchasing new knives from the Queen factory.  Just too many issues that can’t, in good conscience, be passed to my customers.  We will keep a look out for the great Queen knives of days gone by and try to pick them up on the secondary market.